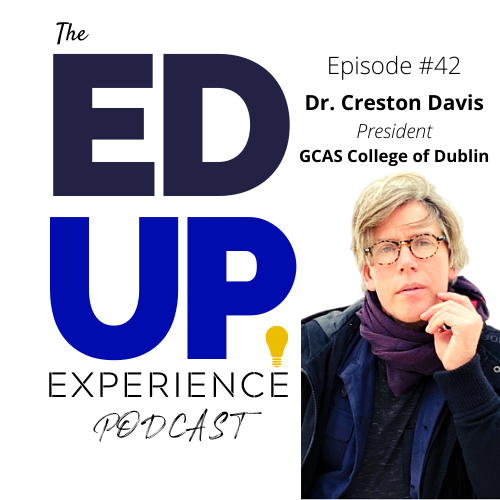 Guest Bio: Dr. Davis has over 17 years of award-winning undergraduate and graduate teaching experience across a variety of subjects including philosophy, religion, critical theory, history, literature, economics, ecology, and psychology. Additionally, during his teaching tenure, he has taught with Pulitzer and Golden Globe Award recipients.

Episode Summary: A conversation with Dr. Davis about his innovative model of higher education, a decentralized education venture co-owned on blockchain by GCAS College faculty, graduates and financial supporters, with its own cryptocurrency, GCAS. https://gcas.ie/introduction

The traditional model of higher education, the one in which college students borrow tens of thousands of dollars in student loans to pay ever-growing institutional tuition, is broken and in desperate need of reform both in the United States and in many countries throughout the world.

Today, the average federal student loan debt in the United States is $37,014. For students also borrowing private student loans, that figure climbs to an average as high as $40,904. To make matters worse, the student loan debt growth rate outpaces the rise in tuition costs by more than 350%, as reported by the Education Data Initiative.

In England, where student loan repayment is income-contingent with monthly payments based upon a graduate’s annual earnings, the average debt of graduates in 2020 was £45,000 ($56,426 USD). It’s clear that student loan debt is weighing down today’s college graduate. Nevertheless, it’s merely one aspect of an education system in need of an overhaul.

“Make higher-ed institutions put more skin in the game. It’s worth considering better mechanisms for future income-sharing arrangements between students and universities. Right now, schools don’t gain much when students succeed, and they remain too insulated when debt-loaded students fail.

At most universities, your personal success matters to altruistic professors and mentors, but it doesn’t matter much to the billing department or the bottom line—schools just need the tuition money to flow. Students and their colleges should have a shared, long-term interest in students’ success.”

While an Associate Professor at Rollins College, Dr. Davis began to see how the system was broken and consequently, the long-lasting financial impact on future graduates. Having entered the teaching profession to help open doors for students, he made a stark realization while teaching at Rollins College in 2013. He realized the indirect role he, himself, was playing in the broken educational system.

Upon earning their degrees and entering the workforce, students were already saddled with tens of thousands of dollars in student loan debt. Whereas he had pursued a career in teaching to help create endless opportunities for students, he realized student loan debt was closing doors before they could open.

What was the point of a college education if students graduated weighed down by massive loan debt, many of whom also graduated without a goal or vision of what they wanted to do professionally?

Recognizing the counter intuitiveness of the model, Dr. Davis voluntarily gave up his Assistant Professor position in 2013, withdrew his retirement and began the Global Centre for Advanced Studies. While a risky move, he knew it was the right move. To him, teaching was about the encounter of individuals coming together and risking the unknowable for the opportunity to learn in a shared space.

At the center of the model is an ecosystem centered around the student, pedagogically and financially. In founding GCAS College, Dr. Davis set out to create a holistic approach to teaching the full student, the full range of what makes them who they are in the global community.

The agile content structure, materializing around subjects and topics students are interested in exploring infuses timely, relevant and meaningful content into degree programs. Being malleable creates opportunities for students to meet and learn from subject matter experts through platforms in which someone speaks in Spanish and it's immediately translated into English.

In terms of accreditation, GSAC College is an accredited college of the Woolf collegiate consortium, offering accredited degrees under the European Standards Guidance and in line with the Policy of Quality Assurance, with courses with ECTS credits specifically designated as such. The majority of degree programs remaining at GSAC College are currently unaccredited; however, that is expected to change over the next 12-18 months at which point certain degree programs will begin to be offered under the European Standards Guidance.

Dr. Davis’ dream has transformed into a global network spanning five continents with centers in places like Germany, Greece, Ireland, Uganda, Chile, Australia and the United States. As evidenced by the 2.5 million people that have been reached through over 50 seminars, international conferences and workshops, the model has and continues to gain traction.

A Financial Model That Empowers Everyone

As previously mentioned, a major highlight of the program is its unique financial model. While its mission is to provide students with a world class, debt-free education, there’s much more to the GCAS College model when it comes to the financial realm.

GCAS College is the world’s first global debt-free, accredited college co-owned by faculty, staff, supporters and graduates powered by its own crypto-token, GCASy, on blockchain.

In essence, Dr. Creston’s model centers around mutually beneficial financial prospects amongst a group of stakeholders who share the same passion and goals at the institution.

Take faculty, for instance. Historically, faculty engagement has always been something that higher education has struggled with in different ways. However, if a faculty member suddenly has a stake in the organization, motivation is likely to grow along with their sense of belonging and commitment.

In terms of advertising and marketing, GSAC spends hardly any money on either. Instead, it gains free promotion from word of mouth at the different events it holds across the world. It’s that personal and professional buy-in from participants and students that has made GSAC College the type of institution it has become today, the kind it set out to be when founded in 2013.

On the investment front, Dr. Davis vets the right kinds of investors and not the ones who simply see green. Alternatively, he seeks out investors with heart who see and believe in the model and the genuine impact it makes on the lives of students.

When students graduate, any investment they put into their tuition is converted to ownership shares with students earning tokens that they can use to bring down their tuition even further. When students earn a token, they will have it on the Ethereum Blockchain. At that point, students have the freedom to do whatever they wish with their GCASY tokens. They can be sold, traded or even used for access to GCAS seminars and events.

As outlined in the infographic below, GCAS works for a better economy: 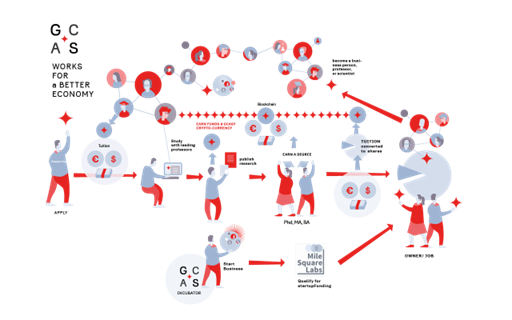 The innovative model Dr. Davis has created is even more relevant and needed today as the student loan debt issue has only been increasing since the founding of GCAS College in 2013. We believe Dr. Davis’ mission would be very beneficial to students and researchers to ultimately add more value to society than the traditional model that the majority of students experience. The financial burden graduates have today when completing a traditional bachelor’s or master's degree does hinder their ability to make a difference in the field in which they are passionate. While the GCAS model would create a stream of benefits from having the students more invested in their education to spreading that knowledge into society and creating a more amicable and equitable environment within the education system, there will be some resistance as there always is with change.

The ability to make education more accessible creates a more even level playing field. There are many new and different ideas on how to create accessibility with GCAS being one, MOOCS, micro-degrees and companies educating employees on the job also helps to create more equality in education, decreasing the financial burden. The GCAS model may take more time to gain traction to the point where it’s a more mainstream option, but the concept is welcomed by those pushing for more accessibility and less financial burden. The question will be, how do we get society to embrace this type of change more and not be so stuck in the traditional ways to obtaining higher education degrees?

A New Model in Higher Education based on Quality, Financial Equity and Cryptocurrency

Feel free to share this article and associated podcast episode with your colleagues in the higher education community. 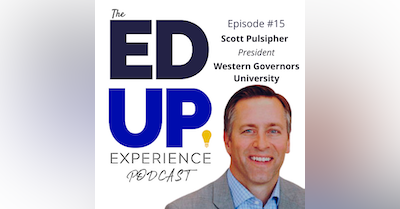 Re-Imagining the Promise of Higher Education

A conversation with Scott Pulsipher, as he gives us priceless insights into the winning formula he and his team have used to propel WGU to amazing succes…